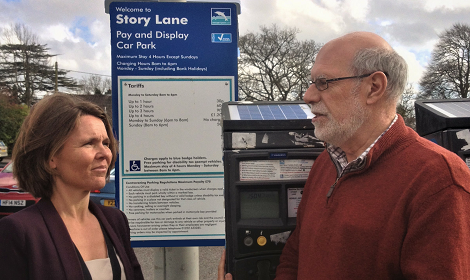 Liberal Democrat Councillors for Broadstone Mike Brooke and Vikki Slade have launched a campaign to stop the hike in car parking fees after the Conservative cabinet at Poole Council voted to raise the cost of parking by 150%.

Poole Council's Conservative Cabinet unanimously voted to raise the cost of parking from 40p an hour to £1 an hour in District shopping centres, even though this could have serious implications on the local shopping areas within the Borough.

There will be no reduced Sunday rate, a new overnight charge in the town centre and at beaches, and a new peak season beach charge. The cost of an annual permit for District car parks is set to increase from £225 to £500, while the quarterly permit increases from £70 to £150.

The Conservatives on Poole Council justified the need for these increases to parking fees by saying that the council is investing £3.2m on the new Dolphin Centre car park so more revenue needs to be generated in order to pay for this. The council however already has a rather large parking charge surplus of over £2.5m, while other authorities of similar-sized populations only have surpluses of around £225,000.

Councillor Mike Brooke said: “Local shoppers have indicated they will no longer come to Broadstone. Instead they will go to locations where car parking is free or have a better retail offer for less cost. That means they will not be going to Poole town centre either.”

This hike in parking fees may have an even bigger effect on the village of Broadstone, who's shops rely heavily on the 'pop in visitor' buying a newspaper or a pint of milk.

Due to Broadstone's shopping area being so reliant on these 'pop in visitors' the dramatic decrease in footfall in the area will have a devastating effect on the local economy and will lead to more shop closures that many people in the area already know are at an all-time high.