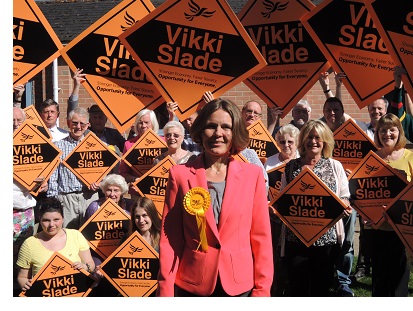 The Lib Dem Fightback has started in Dorset!

Not long ago, I scooped 70% of the vote in my ward, Broadstone, one of the largest gains of the year nationally.

I was elected for my strong record of fighting for local people having campaigned for community safety projects, protecting local bus services and maintaining Broadstone's green spaces.

It just goes to show that voters are disillusioned with the other main parties. As Lib Dems we pride ourselves on fighting for our local communities all year round, not just at elections.

But the fight continues...

Cuts to vital local services like buses and youth clubs, a growing housing crisis, further damage to our environment through fracking are just some of the problems facing us here in Dorset.

I like how Tim Farron put it: "With our country facing huge challenges - from inequality and injustice, to an NHS in crisis and an economy in jeopardy - we are left with a reckless, divisive and uncaring Conservative Government and Labour fighting among themselves with no plan for the economy or the country.

We simply cannot stop fighting in Mid Dorset and North Poole and the surrounding areas. We must take every opportunity there is to stop the Conservatives.

That's why I want to Fightback NOW. Will you join me?

I've launched an ambitious fundraising appeal with the aim of raising £1000 to help rebuild so that we can oppose the Conservatives' ruthless plans and secure a bright and sustainable future for our community.

We rely on the kind giving of local residents to fund our campaign. Donations pay for leaflets, letters, surveys, telephone calls and staff. They allow us to work hard for our communities and campaign for a better Dorset for all.

Whether you can donate £5 or £500 this is your chance to join the Fightback. I am very grateful for any support that you can give.

With my very best wishes,

If you would rather send us a cheque, please make it out to "Mid Dorset and North Poole Liberal Democrats" and post it to Liberal Hall, 14 York Road, Broadstone, BH18 8ET. Thank you.

£5 will pay for over 200 Focus leaflets for households in your area to spread the message of the Fightback!

£10 will help us print 500 Residents' Surveys so that we can find out our local communities' needs.

£20 allows us to write letters to 50 households and build local support for our campaigns.

£50 will allow us to produce enough leaflets to cover an entire ward: one for every household.

£100 means we can campaign by contacting over 500 local people over the phone.

£500 will allow us to employ a long term member of staff and start winning again!