As a child I was always the one who struggled with emotions, I was either completely manic, working long into the night utterly focused on my latest passion, or completely unable to cope with the simplest tasks and boiling over about the littlest thing.   Other family members suffer the same swings in mood and whilst the drive it gives you makes anything possible, it can be very wearing and make you extremely difficult to live with.  It turns out that we have a chemical imbalance in our brain which makes coping with stress a bit tricky and when combined with other factors in life can send you completely over the edge.  Add in a new baby, financial crisis, bereavement or family breakup and you're well on the way to a nervous breakdown.

When my oldest daughter was about 9 months old I had to take four months sick leave as simply getting out of bed and focusing on making breakfast was about the limit of my ability.  As someone who had been a high flying financial adviser this simple fall from so-called normality threw me further into depression – after all I had a great job, a  fantastic husband, a gorgeous baby and a lovely home...what could I possibly have to be depressed about!

In my dark days, I had to call family members and beg them to take the children out of the house, I have thrown things (sometimes at people), I have thought about just driving until I got to the end of the world, I have rocked in a corner ..there it's out....am I crazy?  No, I'm just me!

Now I don't usually go around telling the world that sometimes I live on the edge but when I see someone who is clearly struggling with their mental health I share my story and it helps them see that it's no different to relying on insulin as a diabetic, or blood pressure tablets.  In NHS Dorset CCG alone there are 36,414 people that have been diagnosed with depression But the real figure may be even higher. All too often, people are unable to access the support and treatment they deserve. For many years, mental health has been stigmatised with people feeling too embarrassed or ashamed to ask for help.  We need to break down these barriers. The sooner we can talk openly about mental health, the sooner people can get the support they need, like I have. 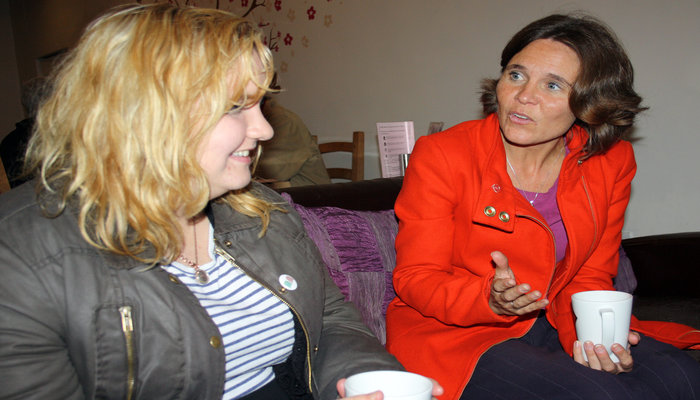 It's time for us to accept that our mental health is vital to our overall health and stop pretending it doesn't matter.  I When I tell other mums at the school gate, or work colleagues their first reaction is “but you're so successful” or “you are the last person who looks like they have depression” and that's the point isn't it.  I am so proud that it is the Liberal Democrats who have committed to champion equality for all people with mental health problems and we won't stop until this is achieved. It's wrong that in this day and age there is still stigma around mental health. Simply talking about how you're feeling can really make a difference to people.  You wouldn't think twice about telling a friend you've broken your leg – physical and mental health should not only be treated equally in the NHS but should be discussed and treated equally in all other spheres of life.

I recently met with the local community mental health team in Poole and I was horrified to find that some of their clients were waiting for over two years to even be seen – we wouldn't allow that for someone with a heart condition, but with a serious mental health condition two years is a disgrace.  Bit by bit, we are making progress: transforming people's attitudes and putting in place the reforms necessary to deliver long lasting improvements in our mental health services.

Deputy Prime Minister Nick Clegg and Health Minister Norman Lamb are leading Liberal Democrat plans to invest an extra £150m over five years to improve services for children and young people suffering from eating disorders and calling for all NHS trusts to commit to a new ambition for zero suicides.  It is truly shocking that in 2013 569 people in the South West took their own lives.  Each and every one is a tragedy, so I am sure it is an ambition that every mental health professional would share.

The Liberal Democrats are also using £400 million to help people with mental health problems get the right support early on, such as psychological (or “talking”) therapies. We are also introducing the first ever access and waiting time standards to make sure people get help quickly when they need it – just as they would with a physical health condition.  We have committed to invest at least £500m extra every year in mental health in the next Parliament, building on the waiting time standards we have already introduced and improving support for new mothers, children and adolescents. Fundamentally, this is about making sure everyone gets a fair chance in life.

Take 5 minutes out of your day today to talk about mental health – it could make all the difference #TimeToTalk.